This is the story of Betfairpoker. Of a man who is a machine. Of an eagle that dreamed of being President of the USA. Of a mouse that sings.

A year ago I wrote about “The method behind the madness that is @Betfairpoker“.

The post was based on a telephone interview with Richard Bloch, Betfair’s Head of Global PR.

At the time the question on my lips was the question on the lips of most people who were encountering this zany, personality-led corporate Twitter account for the first time – “What the fuck?”

Twelve months later and Richard kindly agreed to speak to me again. This time the main questions were “what have you learned?”, “what do you do to keep it fresh?”, “what do you measure?” and “what next?”

This post contains his answers plus, at the time of writing, a couple of breaking news developments.

Richard, Betfair and the Betfair Poker writers have “learned loads”.

A year ago the random 140 character outbursts sat uncomfortably within the culture of what Richard describes as a basically conservative, whiter-than-white service company. The @Betfairpoker account was drawing as much raised eyebrow attention internally as it was externally.

Twelve months on and Richard is clearly pleased at the extent to which the Betfair culture has not just embraced and celebrated the success of this errant outpost, but also by the fact that the link between creativity and effectiveness has been recognised and internalised. The environment in which he operates is “a little bit warmer” than when we last spoke.

He is also very proud and protective of his writers. The Twitter profile is manned (womanned?) by the same four writers who were setting the tone 12 months ago. It was his strategic decision to adopt a personality-led approach to the brand’s Twitter presence. It was his decision to outsource the tweets to professional writers, managed by Dave Allen – an unusual move at the time. And now he is keen to maximise the share of credit given to said writers. You get the sense that Richard is as pleased by the additional work that his writers have secured within Betfair and beyond because of their work with him as he is pleased by the commercial benefits of their input to Betfair Poker.

The writers also handle the lion’s share of replies and conversations, although Richard himself jumps in on DM’s and serious business enquiries.

In Richard’s eyes the Twitter profile, which grew from 8,000 to 15,000 followers during 2011, is still primarily a brand awareness play. And it does this job well, generating between 50 and 100 comments per day, and with some standout posts like the dognapping episode below generating around 300 retweets.

This morning I received an anonymous email from a dog kidnapper. Here is the transcript. http://t.co/KiGTRP4z 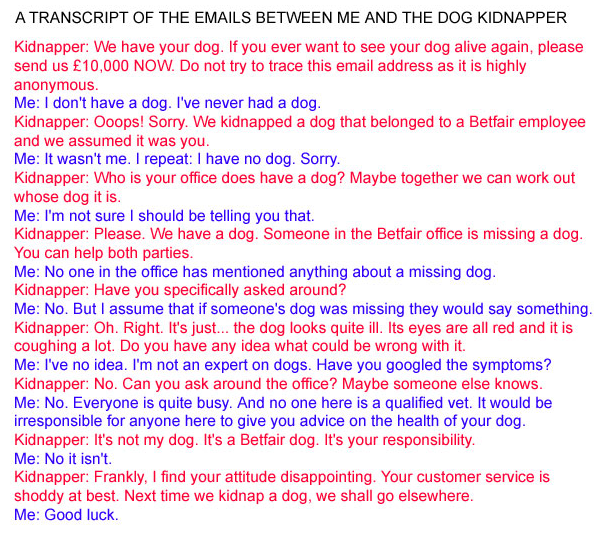 But he also “jumps through a few hoops” to demonstrate Twitter’s harder commercial value to the business. He can attribute new customers to Twitter and, over a a period of 6 to 12 months, derive a reasonably accurate calculation of the lifetime value of these converts.

One of the main learnings has been what to talk about and when. The Twitter account is steadfastly targeted at low stakes casual poker players and poker newbies. Between the hours of nine to five the tweets are steadfastly random – what Richard calls “normal rambling”. But the poker quotient is ramped up in the evenings.

It struck me that, in this context, the commercial hub associated with the Twitter spoke is a pretty hard landing for a curious but inexperienced newbie. Richard agreed but, not surprisingly, had a plan up his sleeve.

To be precise Betfair Poker is heading for Facebook with a page and some apps some time within the next 6 months.

The page is already there but it’s a holding exercise for the time being. The status updates are no more than an RSS feed of @Betfairpoker tweets.

It can be a tough challenge for brands putting meaningful daylight between the objectives, content and approach for Twitter and Facebook. Too often it’s the same stuff simultaneously broadcast on both channels.

I shouldn’t have been surprised that this has been thought through for Betfair Poker.

The brand’s Facebook page will be the soft landing for poker-curious new customers that the website isn’t.

To be precise Facebook page will be a place where new players, attracted by the brand’s personality, can learn to play poker in a fun way. Richard isn’t able to give more details at this stage but it already it makes intuitive sense. The Facebook page will be set up to play a complementary role to the Twitter profile. It is clever and commercial.

Everyone is obsessed with the Like button, which I hate. The “we need fans” approach is forcing people to do things that aren’t natural. It sounds simplistic but we’re just going to provide things that people want and that people want to talk about. It will be a soft place for people who are new to the game to land, a comfortable environment. We already have a forum on our site for the experts.

Google offers over 7.5 million returns for a search on the two words Twitter and serendipity.

There are lots of examples of good things happening to people who do good things on Twitter.

So I shouldn’t have been surprised when Richard told me that a book was in the offing.

He has been approached by the literary agent that brokered (meerkat) Aleksandr Orlov’s hugely successful A Simples Life with Money Supermarket.

As with the Facebook page there aren’t too many specific details about the book at this stage. Indeed it’s not yet a done deal.

That said the Twitter writers are working on the concept and example copy and the agent is making confident noises.

If the project comes to fruition it sounds like it will adopt a similar approach to the meerkat book (which sold an astounding half million copies in the run up to Christmas 2011). Namely it will primarily be a softly, softly branding exercise for Betfair Poker rather than an additional revenue stream. Indeed, Richard’s view is that 90% of whatever spoils will go to “the guys”, i.e. the writers.

Having spoken to Richard twice now about Betfair Poker and its approach to all things social, the enduring themes are…

The question “why?” has been asked and answered. Repeatedly. In Betfair’s case this has led to some interesting (radical?) answers to the question “how”? But “why” came first.

Yes social channels are about being human. But, as demonstrated by Betfair Poker, they also respond well to applied creativity.

A culture that didn’t naturally get or embrace social gave space and time to an individual that does. In turn that individual has given space, time and responsibility to the most appropriate hired guns for the job.

Betfair Poker is a social space worth watching.