I know this because I started recording my rows on Daytum back in January 2011. 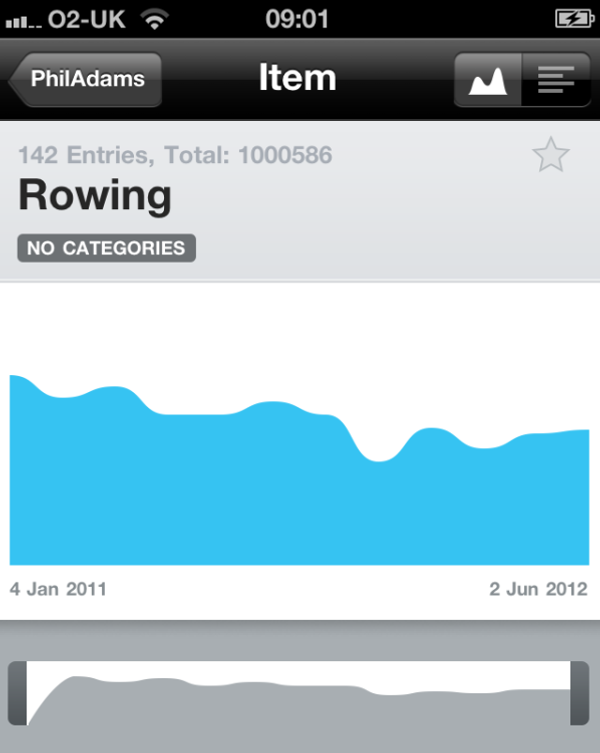 Daytum is a simple data collection and visualisation application that was co-founded by Nicholas Felton – he of the personal annual reports and the Facebook timeline design.

I started to record the data on Daytum because – to cut a long story short – I managed to lose the data stored on the rowing machine itself.

Since when the recording of the data has become an automatic part of the rowing ritual. And each time I make a data entry I’m made aware of how well I’ve rowed in the context of recent performances, and of how frequently, or infrequently, I’ve been putting in the rows over recent weeks.

Only rarely, as with this 1,000km milestone, do I take a longer term look at the data.

And, to me, the above screen grab from the Daytum mobile app is a picture that paints a thousand words.

Taken at face value it looks like my exercise regime is experiencing a slow, steady long term decline.

But that is only partially correct.

For sure, I look at that graph and I can see the impact of me spending two or three days a week in London from March this year.

I can also see the effect of getting a second dog last Autumn. More time spent exercising them. And more canine care time added to my morning routine, which means that I tend to row for 20 minutes rather than the usual 30 on a school day. Same number of rows but less time and distance rowed.

There’s also the fact that I started playing football again just before Christmas – a regular Sunday night 8-a-side killer of a game. That has also reduced the number of weekly row days.

Things I knew to be true are thrown in to sharp relief by the hard data.

My head can look at that picture and objectively explain away the apparent decline.

But my heart looks at the picture and gives my head a kick up the arse.

(How’s that for anatomical metaphor mixing?)

My heart tells my head that I need to shut the fuck up with the excuses and row more.

Collecting and visualising lifestyle data means that blissful ignorance is not an option.

You are confronted with knowledge and that knowledge needs to be acted upon in some way.

I found this much more eloquent quote on Nicholas Felton’s tumblr.

This is on the money.

I’ve definitely learned something from my “pretty chart” and my heart is telling my head what it should look like.

Backward looking data can have a significant impact on forward facing actions.

I’ve written before about Memolane.

From any other service that frequency would be well beyond the SPAM pale.

But the Memolane MemomMails are welcome in my inbox. They randomly curate a selection of items from your timeline which can be from one, two or even three years ago.

On the same day that Daytum told me that I’d passed the 1000 km milestone, Memolane sent me this. 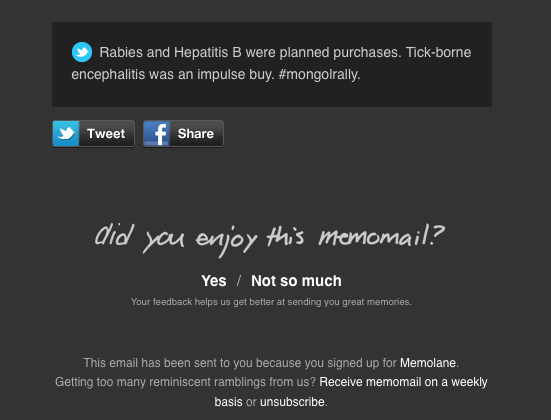 A reminder of the preparations I was making for the Mongol Rally this time two years ago.

Valuable whichever way you look at it.