Notice anything unusual about this photograph? (Apart from the crappy exposure control and lack of Insta-filtering). 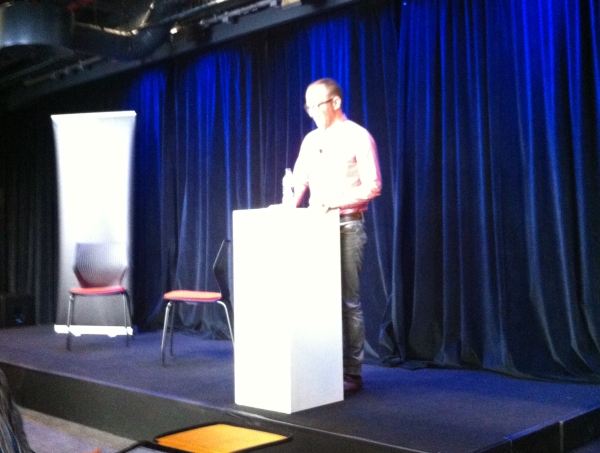 I’m talking about the blue curtain where normally there would be Powerpoint.

He was, as they say, great on his feet.

And he was on his feet for 45 turbo-charged minutes, without a .ppt crutch.

He was also great on his chair for 30 minutes of wide-ranging Q&A.

He clearly knew more about his subject – make that subjects plural – than anyone else in the room.

He was informed. Highly informed.

But, more importantly, he was passionately opinionated.

And that, plus a great eye for a metaphor as James points out, makes for great story telling.

The title of the talk was “The coming of war on general purpose computing“.

And on the receiving end it felt a bit like this…

… where the dashes are stories and the dots are highly mnemonic metaphors.

Evocative words, delivered with Doctorowian conviction, paint a thousand pictures in your mind.

Even the most pithy of bullet point summaries and the most carefully chosen Creative Commons flickr images would only have served to diminish the effect.

How can something still be a trade secret when there are 6.5 million copies in circulation?

Baby monitors that bring planes out of the sky.

Enzymes that dissolve your clothes to make them look newer, whilst actually making them age faster (the insidious influence of marketing).

Plastic, analogue hearing aids will be a retro fashion statement like vinyl.

Computers that spy on and interdict their owners.

We’re really bad at assessing the net present value of data disclosure. When someone in the maternity ward offers us free nappies in return for an email address we don’t think “But what if the kid dies?”

Our pictures look good to the point of looking inauthentic. The LCD screen on digital cameras closed the feedback loop and made us better photographers. We use filters to add the authenticity back.

Your privacy is really important, except when I’m violating it.

Nice cloud you’ve got there. It would be a shame if anything happened to it.

Copyright law used to be an anti-tank mine. It only detonated if you drove a record factory over it. It has become an anti-personnel mine which can be detonated by a 12 year old kid making fan fiction.

Forming groups and doing things together is the most important thing human beings have ever done.

It used to be that student activism was 98% stuffing envelopes and only 2% creating the content with which to stuff them. The internet has turned this on its head.

These are but some of the themes. They’re the ones I was able to capture whilst still listening. They are close to what was said on the night, but the pace of delivery was such that they are about 90% quotation and 10% paraphrase.

Like most of the people I spoke to after the event, I’m still coming to terms with what it all means.

The best attempt I’ve seen to make sense of it all in the immediate aftermath is this by Andreea.

Whatever it means it meant a lot.

Fires, both intellectual and philosophical, were most definitely started.

Above all else, I think, it was a timely, much needed, and much appreciated reminder that there is more – so much more – to this digital lark than branded content and word of mouth marketing.

My good friend Phil Dearson is an internet lifer and a passionate, optimistic believer in the power of the internet to encourage and enable humanity. He was re-energised on Wednesday night.

Thanks, as ever, to Google and Neil Perkin for making this happen.