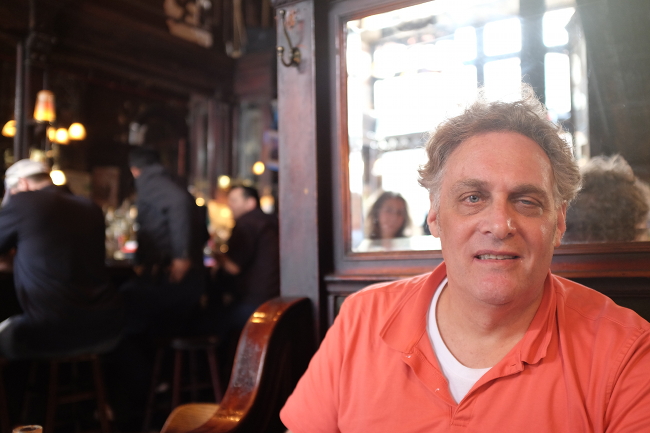 I thought George and I would talk, by which I mean bitch, about advertising.

Turns out he’s far too interesting for that.

George kindly agreed to meet me after a few comment exchanges on his Ad Aged blog, and me not-so-subtly letting slip that I would be in the NYC area on holiday, and we took beer and burgers at the fabulous Old Town Bar on East 18th Street. (The nearest thing apparently to the Tempus Fugit, a fictional bar – sadly – that features in many of George’s posts.)

George’s posts are anecdotal, well informed, opinionated and refreshingly candid. It is unapologetic, charismatic blogging. His point of view is published with none of the edges rounded off and, in that respect, Ad Aged is the antithesis of the anodyne crap that mostly passes for advertising these days. His basic premise is that things are getting worse not better in the advertising industry. Amen to that.

Had our conversation actually turned to advertising, had George asked me about my favourite ads, I would have mentioned the film that I have embedded below.

I like branded storytelling. I like truth well told. McCann trademarked that phrase over a century ago and it remains as good a definition of advertising done well as I can think of.

And I particularly like my truth to be told well by brilliantly cast characters delivering great dialogue.

I am generally suspicious of a voiceover, particularly if it is pivotal to comprehension. Voiceovers please clients, often do well in research, but seldom cut the mustard in the real world.

Dialogue is different. I love well written, well delivered dialogue as much as I dislike voiceovers.

Sadly I can count on the fingers of one hand the creative teams I’ve worked with who shared that love of dialogue and who actually had a talent for writing it.

Most of them have slavishly swallowed John Hegarty’s obsession with visual narrative hook, line and sinker.

This in a world where YouTube surfaces a new star every day, whose videos are watched by millions of people all of whom who are drawn to the idiosyncratic, the eccentric and the lunatic by what they say and how they say it.

This is for George. An advertising character.