A colleague recently received a Facebook notification reminding him of the birthday of a friend who died last year.

The dead leave behind digital ghosts that are programmed to haunt us.

Not so Nigel Dugdale.

He died at the end of December.

When I heard the news I searched his name on Google but, apart from a half-hearted, unfinished LinkedIn profile, there was no record of the man or his professional achievements.

His namesake is a journalist in Limerick who dominates the search returns with profiles on a variety of social platforms.

Which freaked me out a bit because, for anyone who ever worked with him, there can only be ONE Nigel Dugdale.

He was a singular man.

And so I decided to create a digital ghost for posterity.

Which is ironic because the internet is probably the last place that Nigel would choose to haunt.

In fact, when it came to high cut-through advertising and intelligent use of offline media, Nigel was one of the best old school marketing men I’ve ever worked with.

But he spent the last year of his time as my client stubbornly refusing to accept that this internet thing was going to be important.

Admittedly this was back in 2006 when Facebook was only available in American colleges and high schools. But there’s little doubt that, had he stayed in marketing, his head-in-the-sand attitude to all things digital would have restricted his career options.

As it turns out, however, the internet was the least of his worries.

Nigel’s life was coming off the rails in spectacular fashion.

From the outside looking in it was your classic male mid-life crisis.

In his personal life he traded his wife in for a younger model. And his drinking, which was always “highly social”, became excessive.

From several hundred miles away in Edinburgh it was obvious that this huge one-time asset had become a liability.

It was no surprise when he deservedly “left the company by mutual consent”.

The company that Nigel left was AG Barr, where he was Group Marketing Manager responsible for a portfolio of brands including Tizer, the Barr range, Orangina and IRN-BRU.

2006 was our twelfth year of working together on IRN-BRU, a brand which Nigel epitomised in so many ways – uncompromising, in your face, sometimes polarising, funny, unapologetic, maverick.

In those twelve years I don’t think we pre-tested a single idea. Only the mists of time stop me from definitively saying that we didn’t.

Nigel had a very clear idea of what kind of advertising was right for the brand and he knew it when he saw it.

When you presented ideas to him he either loved or hated them, and would pretty much brook no argument around his opinion.

Fortunately for The Leith Agency he tended to love great stuff.

We put in front of Nigel a steady stream of what industry commentators at the time called “edgy” work, a high proportion of which was approved on the spot and executed with no changes from the initial concept.

There was no salami slicing of ideas with Nigel, no death by a thousand cuts, no rounding off of edges.

Some of our ads worked better than others.

When it went well he took his fair share of the credit – including one unforgettable night in London when a bunch of Jocks in kilts cleaned up at the Campaign Poster Awards. 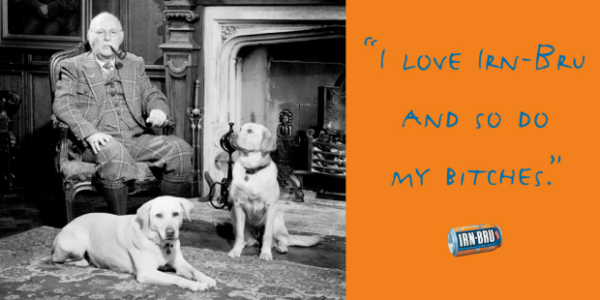 When it didn’t go so well he took more than his fair share of the blame – “I briefed this, I approved it.”

When his media agency was taken over by a larger group he told the new owners – in a read my lips kind of way – that their hold on his account depended entirely on whether they retained his most trusted contact.

They called his bluff and he fired them.

Nigel’s maverick attitude included zero tolerance for industry practices that were counter-intuitive to his black and white view of the world.

He detested the idea of usage fees.

“You mean I pay him thousands of pounds to shoot an idea that he didn’t have and then he tells me that I don’t own the fucking photograph, but I can fucking rent it for a while? Fuck off!”

(Or words to that effect).

The result was what we called the “Martini” buyout – intellectual property that Nigel and AG Barr could use “any time, any place, anywhere.”

This had profound effects on our choice of photographers, directors, models and acting talent.

It was a pain in the arse at the time but, with hindsight, I think the process actually had a positive influence on the unique, raw feel of some of the end products.

The ads are the most visible, most persistent manifestation of Nigel’s time as custodian of the IRN-BRU brand.

But he was most in his element when discussing media rather than creative work. Nigel had an innate, intuitive understanding of what made advertising media tick on behalf of his brands.

I’ve worked with plenty of clients for whom media planning, and particularly the arcane art of TV buying, exists in a black box which is ne’er to be opened. Not so Nigel. Woe betide any media agency bod that tried to overcomplicate, or oversimplify for that matter, issues that Nigel considered important.

It would be an understatement to say that he kept his media agency on its toes. Indeed, his knowledge and nouse, combined with his no bullshit approach to interrogation made even his media auditors nervous.

But, unlike a lot of fiercely opinionated people, he was secure enough to encourage and appreciate fierce opinionation in others.

If I had £10 for every time he told me to “put your cock on the block” or “shit or get off the pot” I’d be writing this on the balcony of my Tuscan villa.

Yes, this was boorish behaviour if you weren’t thick skinned enough to hack it.

But, as far as this correspondent is concerned, it was better than not having your opinion demanded or valued.

Of course, Nigel being Nigel, he took this spade-calling behaviour to extreme levels.

A group of us were at another awards dinner in London. It was one of those occasions when we’d booked half a table and were sharing it with a bunch of strangers in black tie.

We made the mistake of sitting Nigel, who was drinking red wine as fast as we could pour it, next to one of these strangers.

I don’t think we’d got as far as the dessert course when Nigel loudly declared to our new friends that he thought they were “fucking boring”. With which he stood up and stumbled off in the direction of the roulette table leaving the rest of us to pick up the pieces.

There was never a dull moment with Nigel.

Indeed we the agency and each of us as individuals had some great times and some great fun in pursuit of a common goal over more than a decade. At his non-extreme best Nigel was a great client – committed to doing stand-out work and very funny with it.

But, as with every aspect of his life, he could take the humour too far.

Some, make that a lot, of his jokes were chauvinist.

They were the spoken-in-jest smoke that had to come from a many-a-true-word chauvinist fire.

I sometimes winced with embarrassment on behalf of the female members of his team when he aired these views, via the medium of jokes, in mixed company.

For a very clever man he often failed to engage brain before opening mouth.

He was kept well away from the phones when this ad caused a bit of a storm.

The animal rights lobby failed to see the funny side.

And they kicked up a highly co-ordinated fuss about it, via phone, email and concerted PR effort. I can only imagine what it would have been like today if they had been able to add Facebook, Twitter et al to that arsenal.

As it was, the volume of inbound calls was too great for AG Barr to handle alone and so some were diverted to us at the agency.

It is quite hard to argue that an ad is not offensive to someone who has clearly, genuinely been offended and upset by it. Offensiveness is in the eye of the beholder.

Whilst Nigel and his metaphorical can of petrol were kept well away from the complainants he was unequivocal in his instruction that under no circumstances were we to apologise. We could express regret but we could not say sorry.

In the end the ASA did not uphold the complaints and the campaign ran its natural course. Nigel, and we under Nigel’s instruction, had toughed it out.

Unfortunately Nigel failed to tough out whatever factors caused his life to implode.

The charisma turned to chaos.

The vitality turned to morose introspection.

And, most unlike him, he faded away.

David Amers, a better friend than me, did his best to stay in touch and offer support but it fell on stony ground.

If you ever asked Nigel “how are you?” he would always give the same response, “Fucking average.”

He was anything but fucking average.

Nigel Dugdale was an unreasonable man.