It’s not easy choosing a single image to define a month when you take dozens. What does “defining” mean?

Here is my definition of defining.

It’s not about me.

This image works on both literal and metaphorical levels.

The snow started at the end of November and dominated life for the next six weeks. First we were snowed in. Then our farm track turned to glass and not even our “vehicle” could make it up the hill. Christmas provisions we’re carried the mile up to the house in 70 litre rucksack units. Heating oil was delivered in a tractor-towed mini-bowser by a friendly neighbourhood farmer and then manually decanted into the tank. The novelty of #uksnow wore off pretty damn quickly.

So when it started to snow again on Jan 7th as I walked up Dundas Street to the station it was somewhat less than welcome. I whipped out the iPhone and shot the wind-driven flakes through the light from a street lamp. I used the Lomo-fi filter. And “Oh fuck off snow” was the succinct, erudite and heartfelt caption.

A lot of other “stuff” happened in January. Stuff that triggered a blizzard of questions and emotions. Stuff that had a major influence on the whole of 2011.

So this shot is a pretty good metaphor for the year, not just the month. Blurred and confused. Driven and frenetic.

“Oh fuck off snow” was a comment on the literal image. I’d write something different for the metaphor. Not as strong or sweary but definitely with a view to drawing lines and moving on. 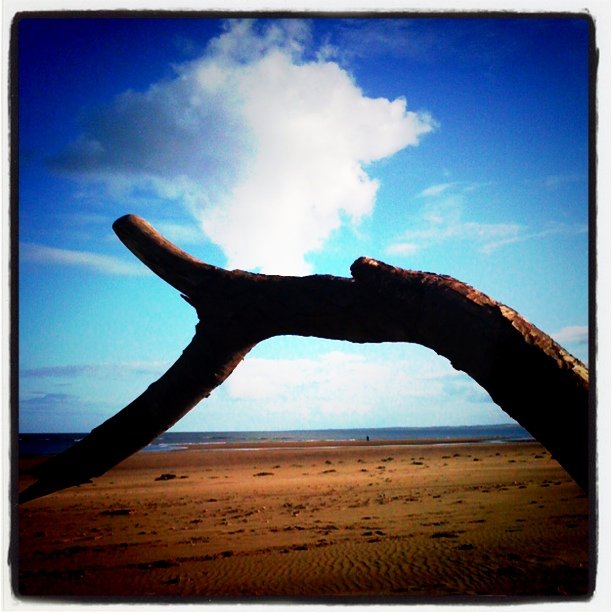 We spent the day on the beautiful beaches of Tentsmuir by St Andrews. I took shots on both my Canon G9 and the iPhone. By and large the iPhone shots were the better shots. This one again uses the Lomo-fi filter. Instagram filters obviously move the images one step away from reality but, used judiciously, they can help to capture the feeling of being there. Instagram is primarily a social platform, with images as the objects of conversation. It’s about sharing experiences and feelings through pictures rather than the intrinsic photographic quality of the images themselves.

This day on the beach was intense and vital. The low sun made for long shadows and high contrast. And the wind served to amplify the readings from all five senses. The Lomo-fi filter heightened the contrast in the original image and went some way to capturing the amplified feeling of being there. The filter adds to rather than detracts from the storytelling.

We live in the country. We have two dogs that need a lot of exercise. That means that I get a lot of exercise. Come rain or shine a large part of my weekends is spent outdoors in the company of said dogs and various permutations of my offspring. It’s actually pretty rare, and therefore remarkable, for all four daughters to walk the dogs with me. I’d guess that around 25% of my 2011 Instagram shots were taken on these walks. It’s second nature to take my phone with me, whereas taking a “proper” camera would indicate a special occasion. Therefore it’s much more likely that magic moments will be captured on my phone than on my camera.

I’ve learned that one of the big advantages of living where we do is that it allows the kids to enjoy a properly extended childhood. They’re all tooled up with various digital devices and gaming platforms but, once you get them out of the house, they enjoy the simple outdoor pleasures just as much as I did at their age(s).

A Saturday morning in April. Sitting on the deck with a coffee, enjoying the first real warmth from the sun in 2011. I turn to my left to see that our chickens are feeling much the same way. Once again the moment is captured only because I have my phone in my pocket. The Hefe filter emphasises the warmth. This image was a celebration of returning warmth.

Living and learning. The lawnmower idling in our orchard. An image shared via Instagram but processed by the TiltShift Generator application. The primary purpose of TiltShiftGen is to add fake miniature effects to mobile photography. But it is great for saturated colours, high contrast and vignette effects. This shot is the result of heavy-handed over-use of the app’s blur function by a tilt-shift newbie.

My eldest daughter attends a Tuesday evening youth club at the Edinburgh International Climbing Arena (EICA). It is a disused quarry which has had a roof added and its rock faces clad with every shape and size of artificial climbing wall. We are blessed to have such a world class facility on our doorstep.

The EICA roof is home to an aerial assault course that traverses the arena at a height of 100 feet. I jacked the TiltShiftGen contrast on this shot to the max on this shot to pick out Molly’s silhouette amongst the gantries.

My wife’s clans gathered at Kielder Water in Northumberland to celebrate my nephew’s 21st birthday. My two year old Border Collie, Ky, went for a swim in the reservoir. Several swims actually. This was a lucky, lucky, almost from the hip shot that caught him shaking dry at the same time as running to catch me up. Those Amazon tribes that thought a camera could steal your soul may have been onto something, because this image perfectly captures the character of this dog at this moment in his life.

No filter needed. No filter added. There is a whole Instagram community built around the #nofilter hashtag which is used by many “Igers” as a badge of pride. I’m quite proud of this shot.

Another #nofilter shot. Another image of Northumberland. My sister moved back to England from Spain earlier in the year and now lives less than 2 hours drive away. Needless to say we have seen a lot more of her recently. There have been several spontaneous weekend visits and the kids (and dogs) love the amazing beaches. Yet again the iPhone edges it over the camera when it comes to spontaneity. It’s the device that’s more likely to be in the right place at the right time.

Blonde, the agency that I work for, turned five in September. It was indeed no party for old men. In choosing the shot above I’ve erred on the tame side. Another TiltShiftGen treatment to oversaturate the colours by the way.

The real Instagram story behind this shot is the use of the #blondedigital hashtag. We have been using the hashtag for several months now to capture candid, intimate shots of the agency at work and at play. And I mean “we”. Most of the iPhone users at Blonde have contributed to the collection of 141 shots and counting. The beauty of using a hashtag rather than an official agency account is that multiple users can contribute. Multiple contributions over time, contributions from more than one place at a time, and multiple perspectives on the same event. (Like #nopartyforoldmen). It is of the agency, by the agency, for the agency. I expect the #blondedigital hashtag feed to be conspicuous by its presence on the new Blonde website, which is a work in progress at the time of writing. It says more about our culture, more transparently and more accurately, than even the finest “about us” copy could hope to do.

I think that internal communications will be the big deal for digitally enabled social networking over the coming years (and I’m not alone), and it’s nice that my own agency is dabbling in this area as well as advising clients.

Instagram is habit forming. In a good way. A mild Instagram obsession makes you look at the world in a different way. The mundane can be made to look interesting, even beautiful, if considered from a different angle and through the lens of an iPhone. This shot was pure opportunism. I had nipped out to the shop next to the agency and, on my way back, I could barely see a thing looking into the sun on a wet Dundas Street. I’ve had some interesting results from pointing the iPhone at strong light sources and so I gave it a go. The Lomo-filter jacked up the already strong contrast to the point of creating a monochrome image. It makes 2011 feel like 1921.

Hipstamatic images are square so they’re guaranteed to work perfectly when shared through Instagram. I evidently follow quite a few people on Instagram who feel the same way as me about Hipstamatic. This shot was taken through the John S lens onto DreamCanvas film.

Of all the lucky shots in 2011 this was the luckiest.

Hurricane force winds hit Scotland. The school that my kids attend in Edinburgh decided to shut and send its pupils home at 10 o’clock. I decided to go home with them and we crossed the Forth Rail Bridge at about 11. By this time the Road Bridge was already closed completely to all vehicles.

I was lucky to be sitting at a window seat looking over at the Road Bridge. The view was dramatic to say the least. Travelling at, I guess, 30 mph over the Rail Bridge I fired off about 10 shots, aiming to get at least one that had some element of Rail Bridge steel in the foreground without totally obscuring the view of the Road Bridge beyond. The shot above was the last of the ten and the only one that “worked”.

I was lucky that there happened to be a tug boat on the river as we were passing by.

I was lucky that only a day or two previously Neil Perkin had drawn my attention to the Dynamic Light application. I used the app to dial up the inherent drama of the shot.

P.S. This post was made a whole lot easier by the My InstaAlbum application. Without it putting accurate dates to each shot would have been a laborious manual process.