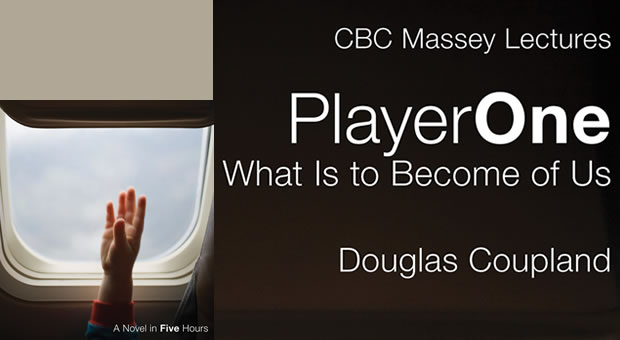 Player One describes itself as a novel in five hours.

It is subtitled “What is to become of us?”

So what happens in those five hours, what is to become of us and what is it all about?

My first thought upon finishing it was that it was constructed as a vessel for several themes close to the author’s heart.

Well “five hours” is inherently structured, and I couldn’t shake this mental image of the book as a website. A website with its core themes indexed and accessible via main navigation buttons – the human condition, relationships, religion, time, storytelling, the environment.

Then I found out that the book actually started life as a lecture series. The 2010 Massey Lectures to be precise.

So the book was conceived as a vessel.

This is a book that is as much about structure as it is about content.

Structure comes from the five hours over which the story unfolds.

And structure comes from the claustrophobic setting of the Camelot Hotel Cocktail Lounge at Toronto Airport.

…a defeated concrete satellite of the main hotel that resembled the third-best restaurant in the fourth-largest city in Bulgaria.

This simple, Spartan, sit-com-esque environment could easily be the basis of a simple, single-set play.

Inside the four main characters, prompted and provoked by two supporting actors, reveal themselves over the course of an afternoon as shocking events take place outside.

They are each damaged goods. But there is enough variety in the damage, I think, for every reader to find something with which to empathise.

“Look at you all. You’re a depressing grab bag of pop culture influences and cancelled emotions, driven by the sputtering engine of the most banal form of capitalism. No seasons in your lives – merely industrial production cycles that rule you better than any tyrant. You keep waiting for the moral of your life to become obvious, but it never does. Work, work, work: No moral. No plot. No eureka! Just productions schedules and days. You might as well all be living inside a photocopier. Your lives are all they’re ever going to be.”

As usual with Coupland the dialogue is both poetic and “fizzy”.

“Rick, I’m holding a do-I-give-a-shit-ometer in my hand, and the needle’s not moving. Shut up. Your afternoon with Tyler is over. Go back to your crappy little basement apartment and get hosed and curse at the universe.”

And, ladies and gentlemen, I think we have ourselves a moral.

It’s just the two of them in their own little universe, and suddenly everything in the world makes sense, because without the crap and the death and the drudgery and the endlessness of life, it would be impossible for passion to exist.

Douglas Coupland is a multifaceted artist. He is contemporary, innovative and provocative in both verbal and visual media.

Player One is a novel conceived as a lecture series.

Player One – and you can find outside for yourself who or what Player One is – is Coupland doing what Coupland does best. Human dysfunctionality laid bare.

It is testament to the artist that Douglas Coupland doing what he does best is still original and interesting. It doesn’t feel like a comfort zone.

And that’s no mean feat.

As I complained in a recent review, Bret Easton Ellis doing what he does best has started to feel monotonous.

This book is anything but.

It’s a shame it only lasts five hours.