There is an implicit disclosure in the title of this post.

Here is the explicit version: I am the subject of Chapter 5 of Heather LeFevre‘s book called Brain Surfing. I have a small reputational (not financial) vested interest in this book doing well.

But there are much more important, non-vested reasons to buy this book. Many of them relate to the content. One of my favourite blogs, Futility Closet, describes itself as “an idler’s miscellany of compendious amusements”. Well, Brain Surfing is a compendium of miscellaneous advertising strategy tricks of the trade AND an amusingly candid travelogue.

From my perspective, however, the most compelling reason to buy the book is not what is in it but who wrote it.

This is an author review rather than a book review.

Whilst Heather stayed with me in Scotland, whilst she surfed my brain, she agreed to give a talk to the Scottish branch of the IPA (Institute of Practitioners in Advertising).

She spoke about her career, about the global Planners (Strategists) Survey which she founded, and about this (at that point un-named) nomadic book project.

I sat a few rows back, in amongst the bright young things of the Scottish advertising scene.

Heather was interesting, arcticulate, charismatic and candid. As well as talking about the great campaigns in which she’d had a hand Heather also talked about the failures in her love life. As well as sharing success stories she also shared regrets. As she mentions in her chapter about Rob Campbell, a man whom I’ve never met but would dearly like to, vulnerability is not a weakness.

I overheard a twenty-something girl behind me whisper to her companion, “I want to be like her.”

At the end Heather was mildly mobbed, mainly by other twenty-something girls, all of whom had been inspired by what they had just seen and heard.

Only then did the penny drop that an important female role model had been staying at my house.

Heather has “done well” at some top class agencies, including CP+B in Miami and Strawberry Frog in Amsterdam. And she is definitely a “strong woman”. But her strength is of a distinctly feminine variety. She does not conform to that horrible cliché of women acting like men in order to get on. I think that is what her audience were responding to, a role model whose success can be aspired to not just in and of itself but also because of the uncompromised, feminine means by which it was achieved.

At the end of the chapter about her stay with Suzanne Powers, Heather laments the fact that Suzanne was the only woman to take part in the Brain Surfing project, and she speculates as to why this might be. It is an interesting perspective on an issue that continues to hold the advertising industry back.

Buy this book if you want to support a female role model in the advertising industry.

Some time later Heather and I meet for drinks on a February night in London. After the small talk I share some things that are on my mind, which are not related to work. She listens well and counsels well. The counsel involves her opening up in an intimate way about some very personal episodes in her past life, which allow me to view my current situation in a different light.

As was often the case when she stayed at our house, the intended roles are reversed. The mentor becomes the mentored.

At first glance, Heather is super confident, super poised, super strong. But she is also a great listener. She has deep reservoirs of empathy. And she is prone to the same insecurities as the rest of us. I am very glad to have met her. I am lucky to call her a friend.

Buy this book safe in the knowledge that you are supporting a very nice person.

It is a cliché that everyone in the advertising industry has a book or a film script or, these days, a technology start-up in them. The day job is just a way of making ends meet and biding time until the big idea lands.

For some people that big idea never seems to arrive.

For others the idea comes but the gumption to do something about it doesn’t.

Heather had the idea and the gumption to make the Strategist Survey happen.

And she had the idea and the gumption to jack her job in and go Brain Surfing.

She is the bona fide maker that we all want to be.

Buy this book if you have “maker” aspirations. It is almost a moral obligation to support someone who has turned a great idea into brilliant action. 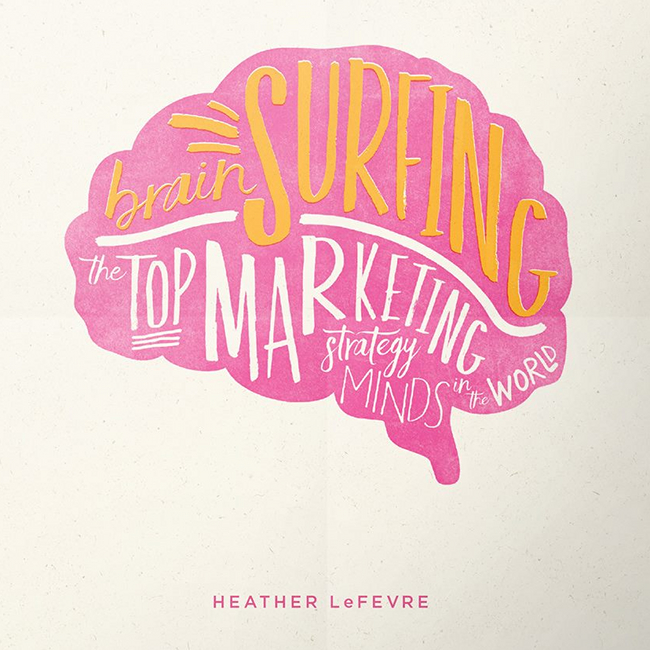