I used the Authors’ Toilet at the Edinburgh International Book Festival.

Once upon a time this would have been an act of mischief, a low level dare.

On this occasion I was not just allowed but encouraged to do so by a nice person with a walkie talkie.

Nonetheless it still felt naughty and fantastic (the idea of admittance rather than the act of relief.)

Was it real or a fairy tale?

It must have been real because I received an email from Sarah at Edinburgh City Of Literature, pretty much demanding that I send an invoice for my reading fee.

What’s more she insists that I turn the resulting cheque into money.

CASH IT! You earned it and then some. Feel free to take a picture of it and frame the picture, but cash the cheque.

I’m still inclined to pinch myself, but the temptation to do so is assuaged by my author’s lanyard.

I have an author’s lanyard.

I picked it up in the Authors’ Yurt, a tranquil oasis amongst the trees and tents of Charlotte Square, next to the Authors’ Toilet.

At the new writers’ reception a few evenings previously I sheepishly raised my arm when they asked the authors to put their hands up.

It was definitely real. 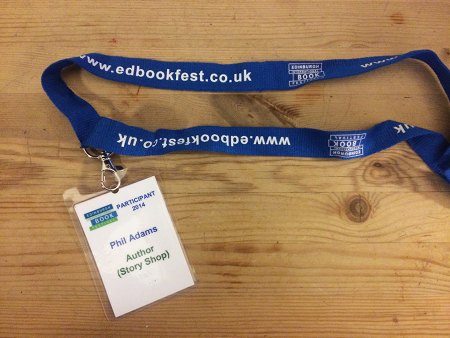 I wrote a short story called Blood Bath, about a salmon and a bear who share a flat, and submitted it to Edinburgh City Of Literature’s Story Shop competition.

We each got to read our story, one a day, at 4 o’clock in the Guardian Spiegeltent at the Book Festival.

That’s to say that we performed our stories. Our written words were chosen by the Story Shop powers that be on the basis of their potential to hold an audience when spoken.

To help us writers become readers, City Of Literature kindly organised a workshop in which we were schooled by professional voice coach Alex Gillon. It wasn’t the most comfortable experience but boy was it useful. How and when to breathe. The importance of eye contact. The art of selling our words. Making every capital letter, every italicised word, every element of punctuation mean to the audience what it meant to us when we wrote it. Alex Gillon is the epitome of constructive criticism. Hard rather than harsh and always fairly so. She wanted us to be great. She and City Of Literature are both class acts.

Alex insisted that for me to have any remote chance of being a class act on the day I had to read Bear’s dialogue in a Russian accent. Cue steep learning curve ascent.

I am eternally grateful to the internet and to benign nutters like Jay Britton for their simple, practical and (in Jay’s case) highly amusing video tutorials, which gave me a fighting chance of being laughed with rather than at. Jay really gets going at about a minute into the video below.

Who knows if the reading (the performance) was any good? Some very nice people who took time out to come and support me said some kind things afterwards. But I genuinely have no idea.

I approached the lectern at 4pm precisely. At approximately 4.01 the heavens opened and Edinburgh’s best impression of a monsoon battered the Speigeltent roof for the next ten minutes.

There was a microphone but I was behind both it and the speakers. I couldn’t hear myself. Apparently the whole thing was audible over the percussion but I couldn’t tell at the time. As a result I belted it out and “projected” a little more than I had intended.

The rain was but the tiniest fly in the most magnifcent ointment. Thank you, thank you, thank you to Sarah and the rest of the City Of Literature team for such a wonderful opportunity. It was a dream. A dream come true.

And thanks to Claire, who had the original idea for Salmon and Bear. It’s going to be a lot of fun writing more together.