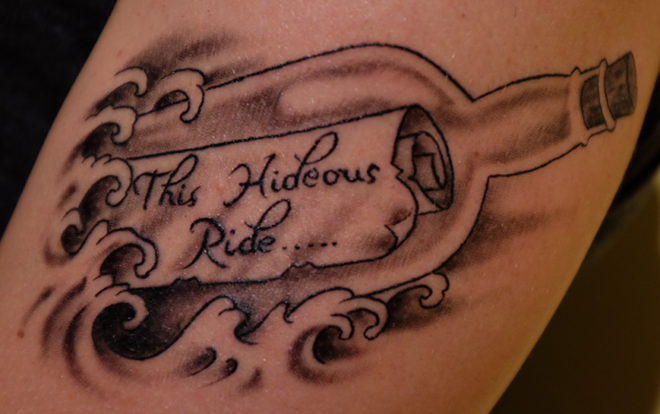 A needle to the waist punctures the girl’s bravado.

“Holy shit,” she gasps as the gun rattles to life, and I’m glad I opted for the upper arm rather than the lower abdomen. Trevor said it would be more comfortable for a first-timer like me and the look on the girl’s face tells me that he was right. She’s puffing and blowing her way through the pain. Her eyes are moist and she’s biting her lip. She’s suffering for her art. I think she’d take some gas and air if it were on offer. I think she’d sign the waiver for an epidural. I think they should have pieces of leather – individually wrapped, sterile, single use only – for clients like her to bite down hard upon.

A minute ago she was all teenage hubris, showing off the autograph which Gary Barlow had written on her arm with a Sharpie pen, and which she’d had fixed and made permanent with sharp needles and ink. The voice of experience.

I don’t know what she had done but it was all over mercifully quick. Not so cocky now. Take that, Gary Barlow fan.

The artist with the gun in his hand is an Aussie. He has a short residence at the studio, en route to his next visiting gig in Hawaii. It is hot outside by Edinburgh standards but he’s wearing a beret and a heavy shirt. I suspect the rolled up sleeves are for show rather than a concession to the weather. His forearms are, erm, impressive. I think he’s concerned for the girl. I think he’s being as gentle as he can be. But that is a seen-it-all-before smirk if I’m not much mistaken.

Between the girl and I sits a stout young man. He remains mute and apparently impassive as some kind of Godzillaraptor is deftly rendered on his arm by a second artist who is hunched over his work. The artist has his back to me and I can see that it is a hunch of focus and intense concentration. The stout man is a cadaver. That’s the name given in tattoo circles to clients who don’t speak whilst being worked on. Let’s call him John Doe.

The reptile on John’s arm is magnificent but I suspect it lacks narrative. A decorative dinosaur with no back story. Skin deep in every sense.

But maybe the story is already told. Maybe the unknown artist of unknown provenance is devoting his rapt attention to imbuing John’s bicep with secret meaning that has been vouchsafed unto him alone. And maybe talk would only cheapen the proceedings.

Either way I’m feeling a little cheated. I assumed that the parlour would be a den of gut spilling; ink as therapy. I envisaged three clients on three chairs simultaneously sharing hopes, fears, dreams and momentous life-defining events. I imagined the air thick with comingled stories that would permeate our tattoos like cigarette smoke in your clothes after a few pints in an old style snug bar.

At least there’s Trevor [that’s not his real name but I daftly didn’t seek his blessing to write this post].

I suspect there’s no such thing as a dull tattoo artist but, for the record, Trevor is an interesting guy.

His work/life balance is pretty much sorted. Much more sorted than most of us. He is just back from the Seychelles and talks about how tattoos fund his scuba and natural history habits. He shows me videos of giant tortoises. He laments the rising of the oceans. He laments how Dubai keeps the lights on in sports stadia at night, just so that they can be seen from passing airliners. He laments how Dubai treats coral reef like furniture, digging it up and moving it around in a gross form of urban feng shui. Trevor doesn’t have much time for Dubai and citations are probably needed for much of this paragraph.

Talking takes my mind off the insistent, scratching pain of the tattoo gun. It’s not too bad actually. Trevor is using a single needle for the outlines and lettering. This draws approving comment from his fellow artists. It is uncommon, evidently, and the sign of an artisan. Trevor explains that it is more usual to use several needles soldered together. In that arrangement the needles more or less auto-regulate the depth of puncture. A single needle should keep the words clear and legible for twenty years or more, but he has to be careful. “If I keep pushing it will just keep going further and further in,” he tells me. Oh ok.

I explain the significance of the bottle, the sense of losing control of my emotions to elemental forces which, like wind, currents and tide, have chaotically determined my ups, my downs and my sense of direction since Rachel’s death. Trevor changes the subject.

I’m not sure I like hearing Trevor describe the needles and gun as his “works”. I totally trust in the parlour’s heath and hygiene practices but sharing needle nomenclature with drug addicts is disconcerting.

Trevor hails from London. Tottenham Hale as it happens. He has worked as a bricklayer and labourer and spent a short time in the family business at Smithfield Meat Market. He made hand-drawn flyers for the London rave scene in the late 80’s and achieved minor celebrity status within that community. And from there into tattooing. Despite the demand and the money, Trevor laments the extent to which tattoos have become mainstream. He harbours a nostalgic hankering for less lucrative, more authentic times.

Trevor does a mean lament.

I wonder what he thinks of me. Just another mid-life crisis probably. Would I be sitting here if getting inked weren’t so normal these days? Who knows?

To be fair my tattoo does indeed speak of crisis, just not of the mid-life variety.

If each man is given just one life-stage crisis to deal with then mine came when I turned thirty. And if that represents mid-life for me then I’ve got twelve years left and those pension contributions are futile as well as inadequate. Rachel, my late wife, was three months pregnant with our first child at the time and the morose introspection hit me like a freight train. My twenties were gone and they weren’t coming back. What had I achieved? To what unavoidable regrets was I already committed?

Fortunately I don’t remember it lasting very long. Fatherhood amazed and delighted me. And I didn’t have enough spare cash to blow it on anything stupid.

Turning forty was a breeze by comparison.

The words belong to Johnny Depp, and I borrowed them for the message in the bottle.

They are from a letter that Depp wrote to Hunter S Thompson on 29th July 1997, during pre-production for Fear And Loathing In Las Vegas, in which Depp would play the part of Thompson’s alter ego Raoul Duke.

Some time later Depp read the correspondence between he and Thompson in a series of videos posted to YouTube.

It appears that Thompson was somewhat concerned (for which read freaking out) about how he might be portrayed by Depp in the movie. And Depp – no mean writer himself as it turns out – is seeking to reassure him on the basis of best intentions and his skill as an actor.

We are at the beginning of this hideous ride and things are just starting to take shape, only starting, so don’t freak out. Give it and me a chance.

It is a curious choice of words. Depp is clearly anticipated a rocky road but he says the words with some relish, and refers to a previous quote from Thompson himself.

Who is the happier man? He who has braved the storm of life and lived? Or he who has stayed securely on the shore and merely existed?

And that is what my tattoo is all about. A permanent reminder that life is a bitch and a hell ride. But a reminder also that you shouldn’t want it any other way. Fear and loathing are the salt and pepper that make our three score years and ten more palatable rather than less.

I think Trevor is pleased with his work. I know I am. But he has more prosaic concerns than the meaning of life. He tells me how to nurse the skin trauma with nappy rash cream, and how to protect my clothes with cling film.