That’s because brands pay to ensure that average advertising gets a decent audience.

Content, on the other hand, is not afforded the luxury of guaranteed visibility.

Here’s an analogy which is a mash-up of physics and probability, rendered on the platform of Artefact Cards.

Namely the section of the electromagnetic spectrum commonly known as light. 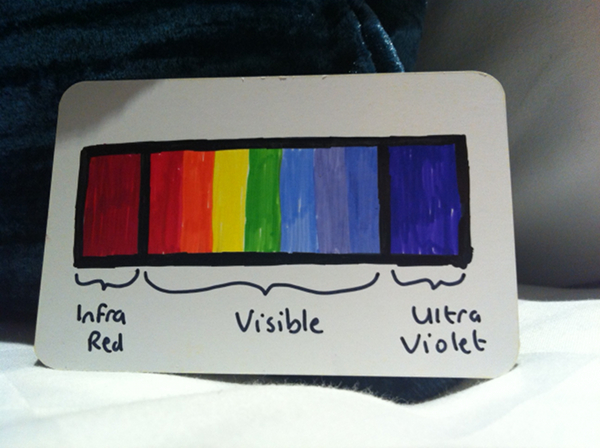 Visible light and all its constituent colours is bracketed by infra red (below red) and ultra violet (above violet). 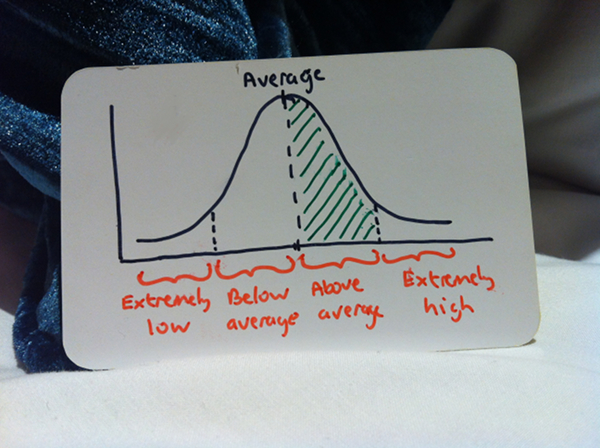 The middle of the bell curve corresponds to average.

Most things sit either side of average. Slightly above or slightly below.

Most are slightly above or slightly below average.

If the image above showed the distribution of idea quality, the green shaded area would represent the proportion of ideas of “above average” quality – roughly 40%. The same proportion are “below average”, leaving only 10% each at the really good or really bad ends of the spectrum.

Which means that I’ve drawn it badly, because 10% is an inflated figure. The evidence of your own eyes and ears will tell you that considerably less than 1 in 10 commercial ideas are of extremely high quality.

Now for the mashup.

Lets overlay a spectrum of visibility on a normal distribution of idea quality.

Lets do it first in a paid advertising context. 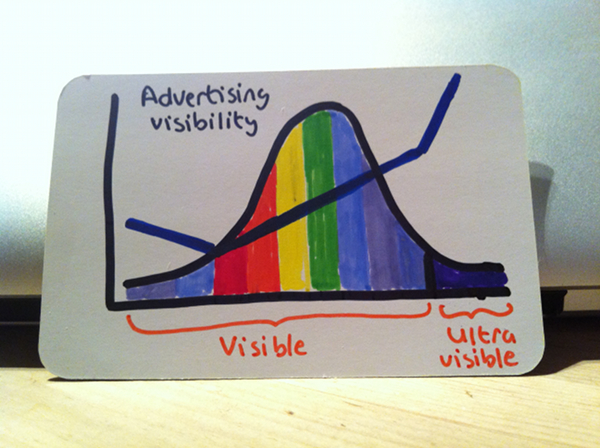 Paid media advertising is either visible or ultra-visible, as represented by the thick blue line.

Paying to guarantee an audience ensures a base level of visibility, regardless of the quality of the idea.

The diagram assumes a fixed level of advertising spend.

So the only thing that varies from left to right is the quality of the idea.

Really, really awful ads at the far left of the bell curve gain extra visibility by being talked about for all the wrong reasons.

Visibility then dips as idea quality increases into the below average zone. No notoriety equals no notability.

As ad quality increases on either side of average, ideas get a paid for audience plus a steadily greater level of word of mouth in line with improving quality. The blue line representing overall visibility (paid plus earned) goes up at a shallow angle.

Above a certain threshold ads get ultra-visible as they become a mainstream topic of conversation. Think Old Spice, think Cadbury Gorilla et al. 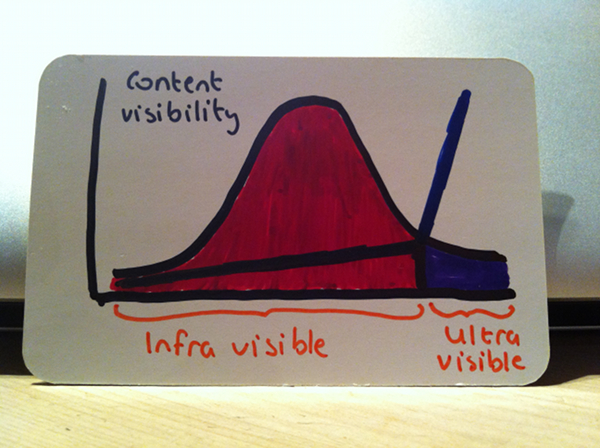 Earned media content is either infra-visible (i.e. invisible) or ultra-visible.

There is no paid for, guaranteed base level of visibility.

Incremental improvements in idea quality (however “better” is defined) do not lead to significant incremental increases in visibility. Without that paid base audience, even above average ideas don’t have enough momentum to “clear the tower” in NASA parlance.

But beyond a certain point* the visibility version of a tipping point is reached.

At that point it’s like some kind of visibility switch has been flicked.

The graph undergoes a step change from infra to ultra

Infra or ultra. On or off.

This free (earned) ultra visibility is what all brands want for their content.

They want the reward.

But most of them aren’t prepared for the risks.

Most client-side advertising quality control systems are designed to deliver ideas in the above average (green shaded) zone of the bell curve.

These systems are not designed to take ideas *beyond a certain point.

Quite the opposite in fact.

If you have a content marketing strategy that relies mainly or entirely on earned visibility then you should be very concerned with tipping points. The points at which your content suddenly crosses an invisible threshold and goes from invisible to very visible.

And you should be very concerned with strategies and quality control processes that help rather than hinder the achievement of that goal.

What does it take for content to earn ultra visibility?

Well to start with, I think ultra is a better frame of reference than extreme.

Most brands tend to shy away from extremity. Often with good reason. Whilst they want to achieve high visibility, doing something that might offend, or which requires the brand to betray its values, is a price that they are not prepared to pay.

The very word extreme carries all sorts of negative baggage.

Content that achieves extreme visibility does not need to be “extreme” in the glass nearly empty way that most brands react to the word.

Ultra is a more palatable, glass-half-full expression of the same thing.

Your content can cut through by being all sorts of ultra.

Ultra funny works, but it is ultra hard to pull off.

Ultra shocking is easier, but outrageous, extreme content (see above) is only desirable for very few brands.

Ultra fast (ultra topical) can work if you are first to put a branded spin on an emerging mainstream topic of conversation.

Ultra transparent or ultra candid content can be very powerful.

Ultra different is an approach that can work for any brand.

Before The Internet and the mainstream adoption of social networks, advertising that was self-consciously different was often accused of being different for different’s sake. It was accused of being fit for award juries but not necessarily fit for commercial purpose.

These days being deliberately different definitely does serve a commercial purpose. Content is different for visibility’s sake.

The founders of HHCL, as successful as they were, must sometimes think that their agency was born too early. Their radical difference philosophy would be tailor-made for technology-enabled word of mouth marketing (social media).

If you want earned visibility you need content ideas that go “beyond a certain” point in terms of quality. Well beyond average.

You won’t know where that point is, but getting beyond it is the difference between infra and ultra visibility.

Delete as appropriate but don’t delete all.