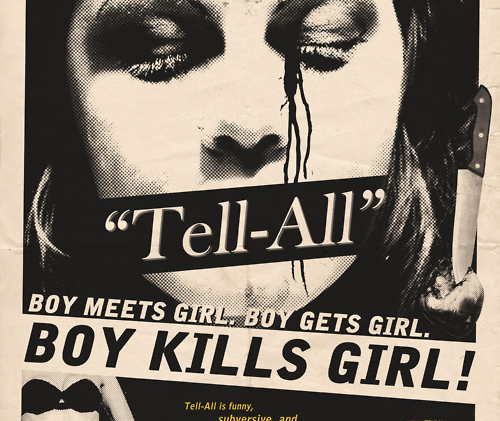 The jealous guarding of a loved one can go too far.

Especially if the jealousy spills over into madness.

This book reminded me of the poem Porphyria’s Lover by Robert Browning, which I studied for my English Literature O-Level some thirty years ago.

The poem is narrated in the first person by Porphyria’s Lover. He is quite clearly delusional, deciding as he does to preserve the perfect moment with Porphyria by killing her.

And for all we know he gets away with it.

Here is the poem in full, retold via Twitter and Storify.

Tell-All is a book about jealous guarding, quiet madness, and an insane decision to preserve a moment through murder.

(Who has lots of lovers).

(Several of whom become husbands).

(Or, as they’re described in the book, “was-bands” or “happily-never-afters”. A series of failed marriages resulting from her self-destructive impulse to commit “marry-kiri”.)

But the first person narrator of this story is not a man.

Not that Ms Coogan would be satisfied with these titles. Throughout the book she repeatedly explores different grandiose ways of describing her role in guiding, molding, shaping and controlling the career and the person that is Kathie Kenton.

I am not merely a woman who works in a factory producing the ever-ravishing Katherine Kenton. I am the factory itself. With the words I write here I am not simply a camera operator or cinematographer; I am the lens itself – flattering, accentuating, distorting – recording how the world will recall my coquettish Miss Kathie. Yet I am not just a sorceress. I am the source.

My purpose is to impose order on Miss Kathie’s chaos… to instill discipline in her legendary artistic caprice. I am the person Lolly Parsons once referred to as a “surrogate spine”.

My full-time profession is what Walter Winchell calls a “star sitter.” A “celebrity curator” according to Elsa Maxwell.

My position is not that of a painter, a surgeon or a sculptor, but I perform all those duties. My job title: Pygmalion.

In short Hazie Coogan is an arch manipulator, the self-styled power behind the throne.

The narrative backbone of Tell-All is the way that Hazie Coogan (according to her first person account) deals with the latest man in Katherine Kenton’s life: one Webster Carlton Westward III.

We learn that Ms Coogan has a track record of “dealing with” the men in Miss Kathie’s life, but that Webster Carlton Westward III is the first genuine threat (i.e. the first perceived threat) to her position of influence.

Ms Coogan sets out to turn Miss Kathie against her latest lover by convincing her that Mr Westward’s only interest is to cash-in on their relationship via a salacious biography, which he plans to publish upon Miss Kathie’s death.

Excerpts from this “lie-ography” are regularly shared with us, including some excruciating descriptions of the couple’s bedroom gymnastics…

“The pungent aroma of her most corporeal orifice drenched my senses. My ever-mounting admiration and professional respect boiling for release, I thrust deeper into the fragile, soiled petals of her fecund rose….”

The story is made all the more intriguing by its context. We are treated to the all the shallow excesses of this studio-dominated Hollywood era. Palahniuk lays bare the miserable lives behind the facade of fame for people like Katherine Kenton – the eating disorders, the surgery, the alcohol, the valium, the luminal and other assorted “moping mechanisms”.

And there is some serious, bold-type name dropping, the result no-doubt of some serious research by the author.

And here’s the passage that made me think of Porphyria’s Lover.

This is love. This is what love is. I’ve rescued her, who she was in the past and who she will be in the future. Katherine Kenton will never be a demented old woman, consigned to the charity ward in some teaching hospital. No tabloid newspaper or movie magazine will ever snap the kind of ludicrous, decrepit photographs that humiliated Joan Crawford and Bette Davis. She will never sink into the raving insanity of Vivien Leigh or Gene Tierney or Rita Hayworth or Frances Farmer. Here would be a sympathetic ending, not a slow fade into drugs, a chaotic Judy Garland spiral into the arms of younger men, finally to be found dead sitting astride a rented toilet. Hers would not be a slow, grinding death or a sad fading away. No, the legend of Katherine Kenton required an epic, romantic grand finale. Something drenched in glory and pathos. Now she would never be forgotten. I’ve given her that.

I do admire Chuck Palahniuk.

He has steadfastly refused to be defined, neither in reputation nor in writing style, by Fight Club.

He is an established author but he is still experimenting with content and form. The result is a kind of polished rawness. Always with more than an element of surprise and delight.

Tell-All is another non-exception to this rule.