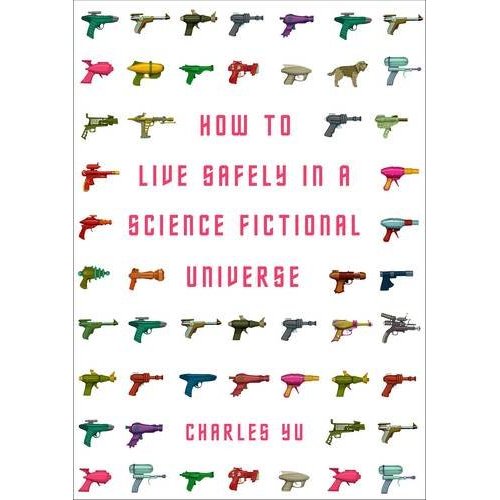 Time travel ain’t all it’s cracked up to be.

This realisation came as a bit of a shock to a lifelong Dr Who fan, particularly the latest Matt Smith iteration.

Time travel ain’t all it’s cracked up to be if you work in the time travel industry and fix time machines for a living.

More specifically, time travel ain’t all it’s cracked up to be if you are a…

…certified network technician for T-class personal use chronogrammatical vehicles, and an approved independent affiliate contractor for Time Warner Time, which owns and operates this universe as a spatio-temporal structure and entertainment complex zoned for retail, commercial and residential use.

In the science fictional universe created by Charles Yu time travel is mainstream and prosaic.

My manager IMs me. We get along pretty well. His name is Phil. Phil is an old copy of Microsoft Middle Manager 3.0. His passive-aggressive is set to low. Whoever configured him did me a solid. The only thing, and this isn’t really that big a deal, is that Phil thinks he’s a real person. He likes to talk sports and tease me about the girl in Dispatch, whom I always have to remind him I’ve never met, never even seen.

Your average time machine repair man doesn’t have a TARDIS.

He has a TM-31 Recreational Time Travel Device.

(Which, by the way, is a “standard-issue chronogrammatical vehicle, rated for personal, private use.”)

Unlike the TARDIS the TM-31 is slightly smaller on the inside than it is on the outside. And your average time machine repair man only has the TM-31 equivalent of Siri for company.

The TM-31’s computer UI comes in one of two personality skins: TIM or TAMMY. You can only choose once, the first time you boot up, and you’re stuck with your choice forever. I’m not going to lie. I chose the girl one. Is TAMMY’s curvilinear pixel configuration kind of sexy? Yes it is. Does she have chestnut-colored hair and dark brown eyes behind pixilated librarian glasses and a voice like a cartoon princess? Yes and yes and yes. Have I ever, in all my time in this unit, ever done you know what to a screenshot of you know who? I’m not going to answer that. All I will say is that at a certain point, you lose the capacity for embarrassment.

Is this book funny? Yes.

Is this book high on originality? Yes.

Does this book give you a regular fix of cool, sci fi (for which read scientifically baseless) geekery? Yes, yes and thrice yes.

But this book is mostly, achingly, poignant.

Definitely, definitely don’t read it if you have any regrets, doubts or shameful memories about your relationship with your father, or your son, or both.

Do read it if you answered yes to any of the above and have masochistic tendencies.

As a teenager he and his science-fictional father worked together in their garage to turn the latter’s time travel vision into DIY prototype reality. It transpires that his father was the father of time travel, but in a sad, unlucky, uncelebrated, other-bugger-gets-all-the-credit, highly embittered way.

Years later, in his TM-31, Yu gets stuck in a Groundhog time-loop that forces him to relive the most excruciating moments of this claustrophobic and unsatisfactory (for which read normal) relationship.

Time travel ain’t all it’s cracked up to be.

Charles Yu cracks it up to be a nightmare.

Not a monster-propelled nightmare. No Daleks. No Weeping Angels.

A technology-propelled but very human and therefore entirely credible nightmare.

It is funny, clever but very uncomfortable.