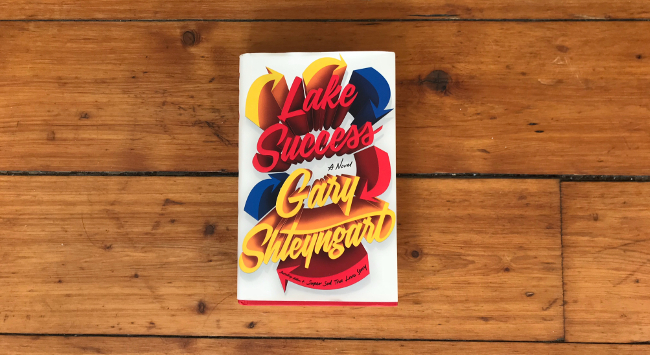 They focus on money because their parents never told them they were loved.
Gary Shteyngart at The Edinburgh Book Festival, 2018

The main character in Lake Success is a hedge fund multi-millionaire. And Gary Shteyngart did hard time in hedge fund circles as part of his research for the book. When he talks about these people at the Edinburgh Book Festival you don’t sense much sympathy.

I spent a lot of time hanging out with people in the world of finance. I’ve never witnessed such a lack of self-knowledge in my life.
Gary Shteyngart

So I wasn’t expecting to find myself rooting for Barry Cohen as he does a dump and run routine on his wife and autistic son. His hedge fund is tanking, he is under investigation for insider dealing, and he takes off across America on a Greyhound bus.

I bought Lake Success because I loved Shteyngart’s Super Sad True Love Story, because it is one of the first novels written in and about Donald Trump’s America, and also because I could. It was available earlier than the official publication date for attendees at the Book Festival. Yet the idea of a protagonist with no redeeming features worried me. At the 2017 Book Festival, Lionel Shriver described the secrets of novel writing in simple terms: make people want to know what happens next, and make people care about what happens to your characters. But what if you don’t care?

We get off to an inauspicious start in this respect. Cohen’s Indian wife, Seema, gives it to him straight about caring for their son, Shiva.

Barry is crossing America in search of himself, in search of an ex girlfriend, in search of redemption. But it feels like Shteyngart is reluctant for his readers to warm to his main man. In Atlanta Barry crashes at the home of Jeff Park, who used to work for him before being fired for a catastrophic spreadsheet error. Given their history, Jeff is a remarkably generous host. But he is not slow to express his distaste for Barry and the world that he, Jeff, has left behind. Ten years on from the banking crash of 2008, Jeff Park is a good spokesperson for those of us in the ninety nine percent.

But that’s how I think of people like you. I always have the same visualization. I start with a row of middle-class houses like the one my dad lives in. And then I see you. You go from house to house, from family to family, and you take money from their wallets, from their purses, from under their sofa cushions, and you put it in your pockets, and when your pockets are full, you put it in a duffel bag with the logo of your fund. You don’t sneak in. You don’t break in. You just walk among these people as if they’re invisible and you take the money they’ve earned. And then you go home and buy a watch or whatever.

In actual fact Barry Cohen is acting out a tragedy against the backdrop of 2016 America, the year that Sergio De La Pava, who joined Shteyngart on stage in Edinburgh, described as, “the most horrifying year in America since the Civil War.” Despite his early narrative setbacks, Barry refuses to conform to the shallow, venal Wall Street cliché. Meanwhile, Shteyngart does eventually conform to Shriver’s storytelling ideal of characters that the reader cares about.

Cohen is the literal embodiment of Shteyngart’s quote about wealth as a substitute for parental affection. Barry has been chasing money to fill the vacuum of meaning created by the death of his mother and the lack of love from his pool-cleaner father. He is an introvert who taught himself ‘friend moves’, a scenario planning approach to peer group conversation. He rehearses mental algorithms that he runs like computer subroutines to navigate social situations. When he talks to Jonah, the son of his former lover, there is also a suggestion that he himself is probably somewhere on the same spectrum as his own son.

And when I was your age I wanted to improve myself too. So each day I’d practice my ‘friend moves’. Like, what are ten things kids in school can ask me, and what are ten things I can say back? It’s like drawing a map or knowing all the train systems in the world. Except instead of facts, you have to memorise what they call small talk. People who aren’t smart like us, they love small talk. ‘Did you hear about this?’’Oh, what about that?’ ‘So-and-so got hurt in gym class.’ ‘That’s cool.’ So I worked my friend moves real hard, and then by the time I graduated from college, I was the friendliest guy in my profession. And it made me hundreds of millions of dollars.

The subtle, hidden complexity of Barry Cohen comes as a pleasant surprise. His personal metamorphosis is cleverly disguised and deftly handled by Shteyngart. Let it be the start of a list of things to like about Lake Success. Namely:

“Grab my pussy,” Seema whispered as he was paying the bill, and they both cracked up, but there was something dangerous and sexy about it too, and her eyes were liquid and needy, so he decided to do as she asked, and moved his hand under the table, but she stopped him at the last moment… …After all his sexual adventures that summer, Barry could find nothing more sultry than kissing his wife on the lips.

Barry checking his Noms Minimatik, a clever choice given that the product copy suggested it was a perfect watch for creative souls like architects and writers. The watch sat around his wrist like something from a gilded, well engineered universe, and it telegraphed just what kind of man Barry Cohen was.

There were two bars at opposite corners of the five-thousand-square-foot spread, one serving the Nasty Woman, a lemon vodka concoction, and the other the Bad Hombre, a tequila-based drink. “I don’t like that both drinks are named after things Trump said,” Seema was yelling loudly over the din of the partygoers and the voices of the cable news announcers blasting from the speakers. “It’s like the only things that matter in this election are what he says.”

Lake Success is part tragedy, part travelogue and part time-capsule. And Gary Shteyngart has matured as a writer since Super Sad True Love Story, whilst retaining a tight grip on the Amercian zeitgeist.

What a New York scene this was, he thought, with unexpected pride. This was the country now. Archipelagos of normalcy amid a dry, angry heat.