I published a post on Medium that I would normally have posted on this blog.

In just 6 days that one post on Medium received nearly four times as many views as this entire blog receives in an average month.

The post in question was my sixth on Medium since receiving my publisher’s invitation. So, statistically speaking, it’s a bit early to be drawing conclusions. But fuck it.

Medium is a great reading platform, it is a wonderful platform on which to write and, based on this sample of one particular post, it is also great for visibility. It is a highly effective content distribution or audience finding platform.

I have shared my Medium data below but it will mean more in context.

I write for the sake of writing. The pleasure I derive from playing with language is the primary reason for the existence of this blog. Publishing on here is an end not a means.

As (at best) an F-list blogger, any other definition of success beyond the simple satisfaction that comes from the act of writing would be pointless.

Sure enough there are occasions when something I write on here catches a social media breeze and a post gets a decent audience, maybe even some reaction. But those occasions have to be viewed as a bonus.

First and foremost this blog is for me. And it has given me much pleasure over the last few years.

So I have been feeling guilty about my affair with Medium, which has caused me to neglect this space.

Medium is a great place to read. But it is an awesome place to write.

If you like writing you can’t help but love Medium. The user interface is gloriously elegant. It just does not feel like a content management system. As a digital writing experience it is the closest I’ve come to the feeling of committing new thoughts and ideas into a virgin Moleskin pad with a favourite pen.

At the outset I thought I could find room and posts for both my WordPress wife and my Medium mistress.

This blog would continue to be about ideas loosely connected with my professional life.

Whereas Medium would be more personal, more eclectic and a platform on which to explore a different writing style.

And so it began. My first post on Medium was a therapeutic act following the death of my wife. It was written for an audience of one – me – and I naively thought that I’d get away with it. A public post admittedly. But on a newish, invitation-only platform with a predominantly American reader base. And I did nothing, beyond publishing, to bring it to anyone’s attention. No social sharing of any kind.

Well it was an early wake-up call as to the power of Medium to make writing visible. The post racked up several hundred views, a significant number of which came from my local area, leading to conversations that I was neither expecting nor ready to have at the time.

The image below shows the stats for each of my six Medium posts thus far. The posts are listed in reverse chronological order with the most recent at the top. The column headings, from left to right, read as follows: Views, Reads, Read Ratio, Recommendations.

Four of the posts have stayed true to my original intent. More personal subject matter with a different stye of prose to that used on this blog. Two posts – Conducive Environment Officers and The real, unspoken problem with timesheets – should by rights have been posted on here. But I was too smitten with Medium to write anywhere else.

The most recent post – The real, unspoken problem with timesheets – has done a little better than catch a breeze. Over 4,000 views and counting in six days (and counting). 4,211 at the time of publishing to be precise. There is a lot of latent hatred out there for timesheets and the post has touched a nerve. As a result the link has been copiously shared on Twitter by some well followed accounts.

I also posted it in three categories on Medium – Thoughts on Creativity, On Management, and Company Culture.

The last of these has only had five articles published to it and, as a result, my post is still listed as the Most Recent article in this category six days after publication. 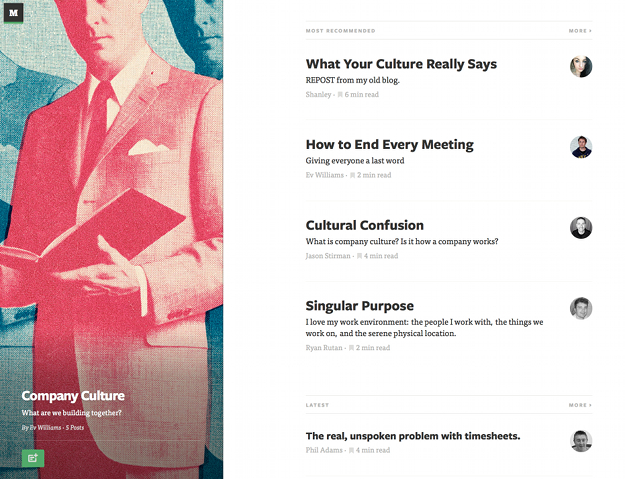 My limited experience of Medium is that posts get the bulk (> 90%) of their views over a two or three day period. The most recent, breeze catching, post is unusual in that it is still picking up views nearly a week after publication. So far, and I emphasise the small sample size involved, it doesn’t look as though Medium provides the same kind of long tail, search-based visibility that I get on my blog.

I suspect that the key to any kind of long tail effect is to achieve a persistent, front page presence in the categories to which you publish. That means either getting enough initial momentum to become one of the most recommended posts in a high traffic category. And/or cross post into categories with low post frequency so that you feature as one of the most recent posts for an extended period of time.

Based on only the most cursory investigation it would appear that Medium posts are actually Google friendly. For instance my most recent post appears as the number three organic return for a Chrome Incognito search for “timesheet problems”. 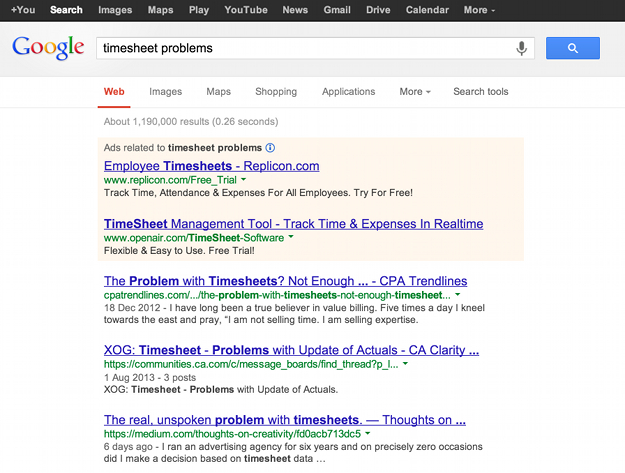 If I were an SEO or visibility specialist I’d be worrying at this point about all sorts of technical and social things like Author Rank on Medium. I’m professionally interested in that sort of thing, but not bothered personally. For the time being the analytics that are available to writers on Medium are limited to those shared above. I have no statistical insight whatsoever into where my views and reads come from.

I write for pleasure and I’m genuinely not concerned with volume or quantity. I’m interested and pleased when it happens but volume is not my goal.

One thing I really do like about Medium stats is the inclusion of Read data as well as Views. It tells you not just how many people visited your post, but how many people actually read the whole thing. That is a quality measure.

Two of my posts have a 100% Read Ratio. Every viewer of these two posts has read to the end. These are the posts of which I’m most proud, particularly How can you know what you want to be if you don’t know who you are?, a post about my teenage daughter and the trials and tribulations of career planning aged sixteen and three quarters.

The timesheet post has delivered the highest volume through a heavy dose of social media luck.

Whereas I’d like to think that the career planning post has achieved its perfect read ratio through writing judgement.

My writing platform love life is about to get even more complicated when Ghost launches to its Kickstarter backers on September 20th. At that point I’ll have some serious decisions to make about what I write, how often and in how many places. Until then I suspect that my infatuation with Medium will prove to be much more than a six post stand.