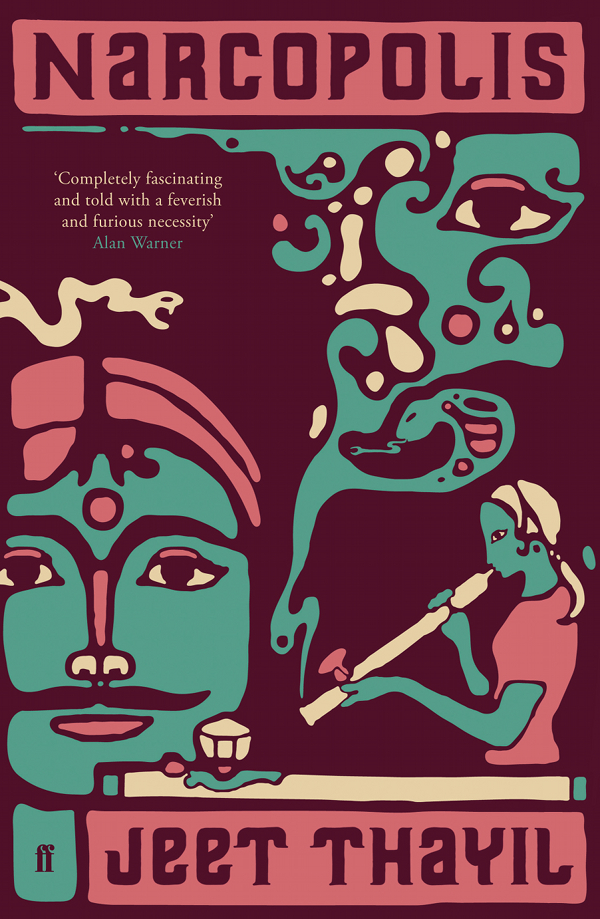 I’m going to India for the first time in September next year.

I want it to be insane.

I want it to be incessant.

I want it to be full on, full time.

I want an assault on my senses or my money back.

Narcopolis is set in India.

It is not a book that breaks you in gently. It gives you no time to get used to its style. It is in your face from the get go.

Its prologue is a breathless, white knuckle taxi ride of a single sentence, which is over two thousand words long. And which ends like this…

… and I found Bombay and opium, the drug and the city, the city of opium and the drug Bombay – okay, time now for a short one, the night’s almost over, a short one to keep the O boat sailing on its treacle tide, and this time all I’m going to do, I’m turning my head and inhaling, you do the rest – and ever since I’ve tried to separate the one from the other, or not because now I’m giving in, I’m not separating but connecting, I’m giving in to the lovely stories, I’m lighting the bowl, one for me and one for me, I’m tasting it one last time, savouring the colour and the bouquet, the nose of it, like that, so good, and then I’m stopping, because it’s time now to subside into silence and let the other I speak.

This book is India on drugs.

Opium and heroin to be precise.

Everything and everyone is fucked up.

And everyone gets fucked or fucked over – be they a eunuch prostitute or a hapless opium den proprietor frozen in the oncoming headlights of the heroin trade.

He had been a believer for most of his life, had observed the five prayer times and followed the dietary strictures. Then he’s exchanged one habit for another, he’d given up God and accepted O. With heroin he’d opened himself up to the ungodly and for this he would pay, he knew. He would be seized by the feet and flung into the fire. Because the powder was a new thing, he devil’s own nasha. Rashid knew it the first tie he saw street junkies bent over strips of tin foil, the way they sucked at the smoke, the instantaneous effect of it, how it closed their eyes and shut them off from their own bodies and the world. He saw them and thought: This is it, the future, coming too fast to duck.

Fucked up and fucked over.

That’s what the book is about.

But I don’t think it has a story as such. The threads that holds this book (grippingly) together are not narrative. They are atmosphere and rhythm.

Shuklaji Street was a fever grid of rooms, boom-boom rooms, family rooms, god rooms, secret rooms that contracted in the daytime and expanded at night. It wasn’t much of a street. It was narrow and congested, and there was an endless stream of cars and trucks and handcarts and bicycles. But it stretched roughly from Grant Road to Bombay Central and to walk along it was to tour the city’s fleshiest parts, the long rooms of sex and nasha.

The people in this book have beginnings, middles and ends. They come and go. They’re all doomed and disposable.

But the story doesn’t. It’s one long atmospheric, rhythmic middle. A middle, a middle and a middle.

It’s a Routemaster bus of a book.

The bus is moving in mid journey when you jump on.  And it is still moving when you jump off, the journey unfinished and unwritten.  In between you stand on the wooden platform, which is exposed to the noise and exhaust from the streets, and hold on for dear life to the metal pole.

Time is a bomb; the earth is on fire.