To understand the man you have to know what was happening in the world when he was twenty.
Napoleon

7.375% is eye-wateringly high by the standards of 2018. But in 1988 it was five percent lower than two years previously, and at its lowest level for a decade. The price of a mortgage also dropped significantly and house prices were expected to rise. It was generally considered a good time to buy.

“You can’t go wrong with property,” they said.

I had just graduated from university and secured my first proper job in an advertising agency in London. My starting salary was £10,500. A university friend and I each bought a half share in a maisonette in Osterley, a few stops before Heathrow on the Piccadilly Line. I borrowed £31,250 for my half of the house. Buying made sense. Interest rates were relatively low by the standard of the times. And who wants to see a large proportion of a hard-earned but meagre salary disappear every month in the form of rent? Instead of throwing money into a black hole we’d be making an investment.

“You can’t go wrong with an endowment mortgage,” they said.

To do this I took out an endowment mortgage. Each month I paid interest on the loan to my mortgage provider, and I also paid into a twenty five year investment policy from a life assurance company. This endowment policy was designed such that my investment would be large enough to pay off my mortgage loan in full at maturity, with some to spare. Bonus!

My mum and dad did exceptionally well out of their endowment mortgage. They paid off their house and had a tidy lump sum left over.

But my win win quickly turned into a lose lose lose.

Interest rates rose dramatically almost as soon as I had signed the mortgage papers. In fact they more than doubled from 7.375% in May 1988 (green circle on the graph below) to 14.875% in November 1989 (red circle). That meant that the monthly interest payments on my mortgage doubled too. This is not good when you are earning £10,500 and living in London. I had not budgeted for a 100% increase in mortgage interest payments. I suddenly found myself worse off than I had been as a student. At least as a student you are surrounded by other people in similar circumstances. Now I was surrounded by beautiful people in London’s hippest and hottest ad agency, in an achingly cool office in Soho. They were all Levi’s and loafers. I was living on baked beans. It was miserable but I somehow managed to keep my head above water until my salary rose and interest rates fell. But it would be another three years (November 1992) before the rate dropped to below the May 1988 level. 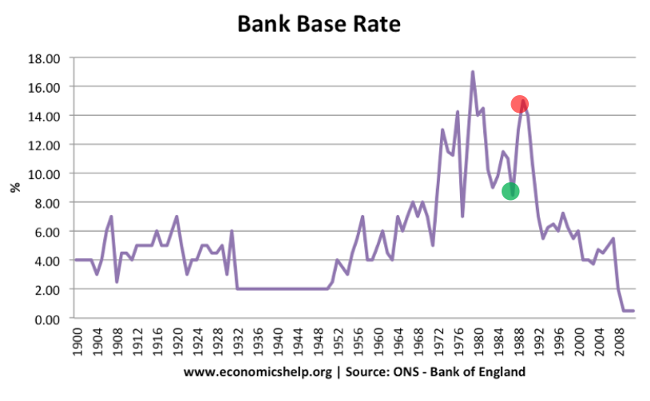 As interest rates go up so does the price of a mortgage. As mortgage costs go up, people’s ability to borrow goes down. People who can’t afford to borrow as much can’t afford to pay as much for a house. House prices fell away sharply in response to the interest rate rises. Little did I know at the time, but I had bought at the peak of the market, the peak that’s just to the left of centre in the chart below. Our house rapidly lost value into the early nineties, leaving my friend and I in a negative equity situation – our investment was now worth less than the amount of money we had borrowed to buy it. In the event that we sold in these circumstances the proceeds of the sale would not cover our mortgage debt and we would be faced with a shortfall. 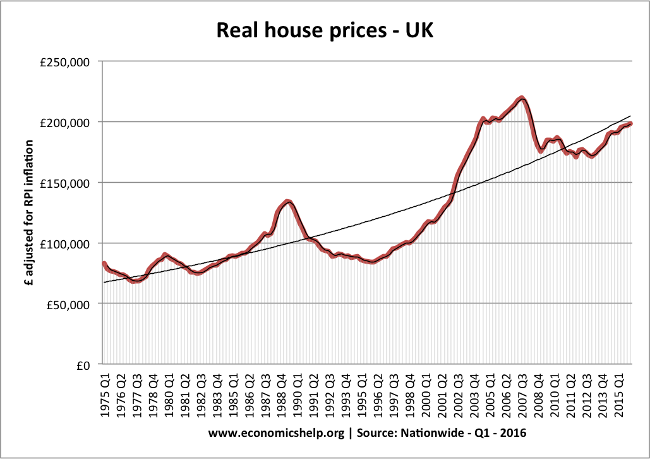 As it happens, I did sell in these circumstances. I was getting married and moving to Scotland. Rightly or wrongly I decided to take the hit on the house so as to make a clean break. I am one of the few people I know who has lost money on property in London.

The chart also shows that house prices recovered over time, and that the long term trend is for property investments to reward the patient investor. However, I didn’t have the benefit of a crystal ball, and I would probably still have sold even if I did, given that it would be another eight years before I would be able to sell for what I had borrowed.

I lost money on my half of the property, and I also lost money on the endowment policy, which I kept going after I had sold the house. Lots of people lost lots of money on endowment policies. It is scandalous. Stock market crashes including the dot com bubble and the 2008 financial crisis eviscerated these policies as investment vehicles. The traffic light system on my annual statements went straight from green to red (do not pass amber) and stayed there. Eventually, through my financial adviser, I was able to secure some compensation by making a claim against the provider for miss-selling. But it did not cover the shortfall.

People have short memories. Not long after each shock, not long after each crash, the language of “you can’t go wrong” creeps back into the vernacular of financial advice, of both the personal and professional varieties. But money can go spectacularly wrong very quickly. And I have a long memory, which has coloured my approach to borrowing and financial risk ever since.

Lucky you if you can afford to ride out a short-term setback and wait for the natural long-term order to be restored. But sometimes the timing of life does not coincide with the timing of economics and you have to take a hit. Since 1988 I’ve always felt that I need to be prepared for that eventuality. I also believe that my generation or the next will be the one during which the idea of sustainable growth will be revealed to be an oxymoron. All bets will be off for everyone at that point.

Both charts borrowed from Economics Help.