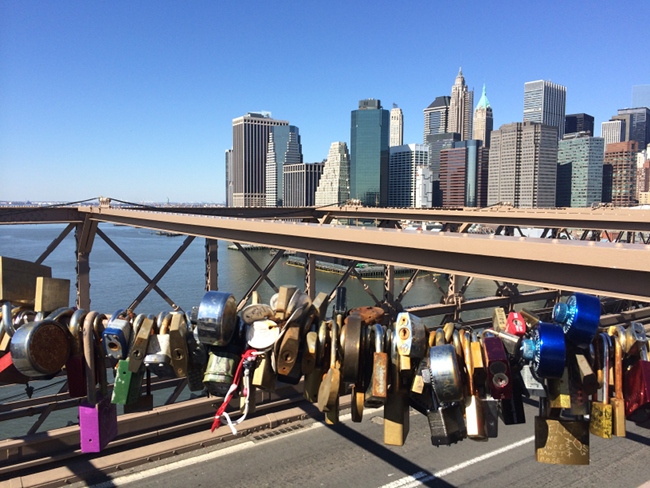 I nearly died from asphyxia in Brooklyn.

To be precise I OD’d on crunchy peanut butter.

But this was no anaphylactic shock. This was no peanut allergy. And I promise that there was nothing remotely auto-erotic about it either.

We, my daughters and I, had spent the day walking the streets of Manhattan. We were tired but exhilarated when we returned to our apartment in the relative peace and quiet of Brooklyn Heights.

We had about an hour before we went out again to eat. The girls were back on wifi and were hitting various social media platforms. I decided to hit a cold beer and a pre-dinner snack.

The apartment cupboards were pretty much bare because we were spending as little time there as possible, nice though it was. But we did have a jar of delicious peanut butter from the local Trader Joe’s.

(By the way, I mention the name of the store solely to add a little contextual detail and local colour to the story. I am in no way implying that the brush with death that followed had anything to do with the responsible retailer that responsibly sold me the responsible item.)

I cracked open a bottle of Brooklyn East India Pale Ale (colour and context again, the beer was not an accessory), quaffed lustily and took down the peanut butter jar from the cupboard. I was alone in the kitchen.

I know it’s unhygienic and the girls always tell me off if they catch me in the act, but eating peanut butter from the jar with a teaspoon is one of my guilty pleasures.

But in this instance my guilty pleasure almost turned to deadly sin.

Gluttony to be precise.

I was hungry and the first swig of beer brought on the munchies. You burn a lot of calories during a day of walking in NYC.

In an act of wanton indulgence I scooped two heaped spoonfuls of peanut butter into my mouth and swallowed without chewing.

Given what happened next it could be argued that this was a big mistake. However I believe that it was my failure to inhale before attempting to ingest that was the real problem.

The peanut butter formed a cloying, adhesive bolus that wedged itself in my throat at the base of my tongue. It created a perfect, airtight seal.

The sensation was most uncomfortable, but no more than that at first. I assumed that some exaggerated swallowing would soon shift it. But it didn’t. It wasn’t going anywhere in a hurry.

After several abortive attempts, discomfort turned to mild alarm. I started to make convulsive swallowing movements, my neck and tongue straining with the effort, but to no avail.

If strenuous swallowing wasn’t going to do the trick it would have to be air that shifted it. But I had barely any gas in my lungs so blowing the pasty lump back up whence it came was not an option.

I was starting to get really worried at this point. I was pacing around the kitchen in an agitated state as I tried various approaches in rapid succession. I would have to try to inhale through the buttery plug. Hopefully it was not of uniform thickness and if I created enough of a vacuum below, it would give way and create some sort of opening at its weakest point.

Remember that I was not actually choking. The peanut butter had stopped short of both my oesophagus and my windpipe. The risk with the intense inhalation approach was that I would dislodge a piece of butter, send it down the wrong way, and add choking to my list of woes. But at this point choking felt infinitely preferable to asphyxiation.

It is difficult to be objective and accurate after the event about how much time had elapsed since the peanut butter seal had formed. I do know that I was now panicking. I can comfortably hold my breath for more than a minute, maybe even two, if I am still and relaxed. But I had no breath to hold and there had already been a fair amount of vain exertion. I was acutely aware of the increasing oxygen debt and my body’s intense, distressed reaction to it.

I was trying to inhale as strongly as I possibly could but no air would pass through the peanut plug. At this point I stumbled into the hall and the disturbing, throttled wheezing noises that I was making drew my daughters out of their rooms.

They could evidently see the genuine alarm on my face because I could see it mirrored on theirs.

I must have been using every muscle in my upper torso to varying desperate degrees to force some air, somehow, into my lungs. Death felt like a very real possibility at this point. I remember thinking, “Not like this. Not now. Not here.” I worried for the girls. A bizarre, short-term worry about how they would get home, rather than how they would cope without their father. My life didn’t flash before me but the logistics of their repatriation did.

The girls were borderline hysterical at this point, “Dad, dad, oh my God, dad!”

Finally, THANK FUCK, my efforts paid off. I had created the peanut butter equivalent of metal fatigue and what felt like a tiny hole opened up. The air made an awful screeching sound as I gratefully, greedily sucked it through. Now that the seal was broken, the plug rapidly collapsed in on itself. I swallowed it down, and the crisis was over. My chest heaved for while as if after exercise but it was done.

Everyone calmed down remarkably quickly.

Let’s go get something to eat.