Here we are a week after the event.

The generous folk at Google, expertly aided and beautifully abetted as ever by Neil Perkin, didn’t so much start a fire this time round as plant a glowing ember that has been smouldering away at the back of my mind for the last seven days.

To be more precise the ember was planted by Toby Barnes, one of three excellent speakers on the night.

Toby talked about making stuff for an audience of one.

And he used the inspiring example of the Where’s Dad application, made for his son, as a case in point. Where’s Dad solved the problem of letting Toby’s 8 year old son know roughly where Toby was at any given time, using Foursquare data that is presented in a pleasingly analogue way. 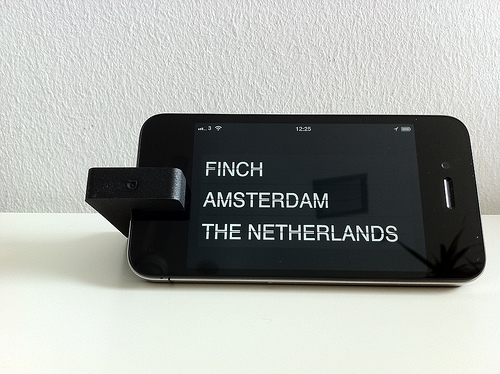 The attraction of designing and building for one person is that you know for sure that you’re solving a genuine problem.

You won’t be “a technology in search of a problem”, an issue faced by many start-ups according to Instagram founder Kevin Systrom in a recent interview. (Which is well worth a watch).

If that problem is shared by others, and if those others can adapt, iterate and enhance your hyper-niche product for mainstream use, well that is a lovely bonus.

That is exactly what happened with Where’s Dad. It became the simple but highly engaging Arrivals application.

So I’ve been playing with that thought for a few days.

Then I read this post on the Open Culture blog. John Steinbeck’s six tips for the aspiring writer.

Forget your generalized audience. In the first place, the nameless, faceless audience will scare you to death and in the second place, unlike the theater, it doesn’t exist. In writing, your audience is one single reader. I have found that sometimes it helps to pick out one person–a real person you know, or an imagined person and write to that one.

But how to apply that approach when you’re working on behalf of a client? How do you find the one person whose problem to solve that, in so doing, will meet the client’s objectives?

I guess that’s what they call digital planning. Elegantly reconciling client objectives with user goals. Asking the right questions of the right people.

These solutions for one person don’t need to be high-tech.

The agency I work for conducted a series of depth interviews with high end IFA’s on behalf of an investment fund client.

The biggest bug-bear that one particular IFA had was that all investment funds provided data about the performance of their funds in pdf documents that were locked for editing. Whereas IFA’s want to be able to show their clients side-by-side comparisons of fund performances from a range of companies.

As it turns out his bug-bear was widely shared, although he was the only one to articulate it spontaneously.

Simply providing fund data in open, editable pdf and Word formats was a clear, tangible demonstration of our client’s declared intent to be the best service provider to the IFA market.

Firestarters is a clear, tangible demonstration of Google’s intent to be a good commercial partner to agencies.

I have been to quite a few Google presentations at various events and conferences.

They tend to be thinly veiled, or not veiled at all, variations on the theme of “here’s some cool shit that you and your clients can pay for”.

Firestarters is different. The speakers are excellent. The content is relevant. Google’s hospitality is very generous. The sell is soft and understated. And the whole thing reflects much better on them as a result. I hope they have the faith and the confidence to keep this event going.

What’s more, what started as an event has become a community. The post-presentation beers, at which many faces are put to Twitter avatars, adds great value to the main event. Neil should be proud of what he has created.

I’m very much looking forward to #5.

Related post : Playing to our strengths – thoughts on “agency” prompted by Google Firestarters #3