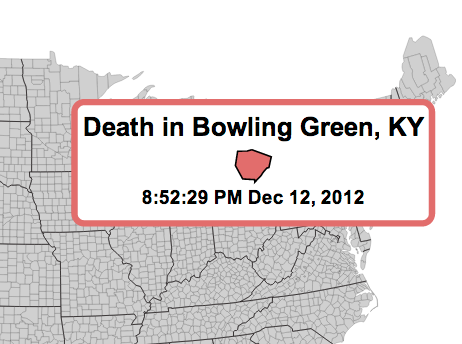 Once upon a time my taxi was overtaken by an ambulance. There was an emergency in Welwyn Garden City.

The thing with ambulances and police cars and fire engines is that you see the lights and you hear the sirens, but the data from your senses usually triggers only a motor response (get out of the way) from your brain. If no evasive action is required it’s most likely that no response is triggered at all. Certainly not an emotional one.

But on this occasion my colleague said “That’s somebody’s life taking a turn for the worse”.

Every ambulance ever since has triggered a conscious replay of that casual statement – “That’s somebody’s life taking a turn for the worse.” I can’t filter ambulances out anymore. I always take a second to pay my mental respects.

This visualisation/simulation of births and deaths in the United States has much the same effect as that throwaway remark about ambulances. 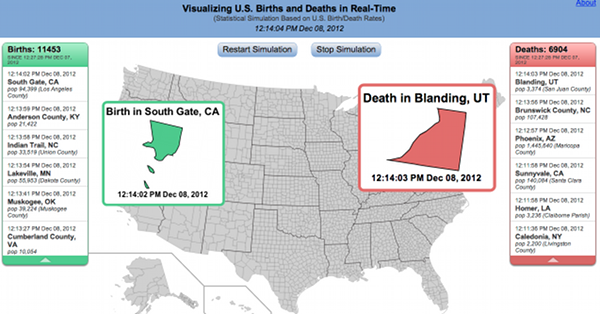 It forces you to think about the circle of other people’s lives.

Births and deaths appear out of the map as shown above at a disconcerting frequency. They appear in centre screen for a few seconds before taking their place in the birth or death column at either side of the screen.

It is done so well that you have to keep reminding yourself that it is a simulation, based on official data, rather than a real time visualisation of real life (and death) events. It is hypnotic.

Full details on the data and technology used to create the simulation are contained in this post.

If you let the application run in the background the births and deaths stack up and quickly cover the entire map as seen below. 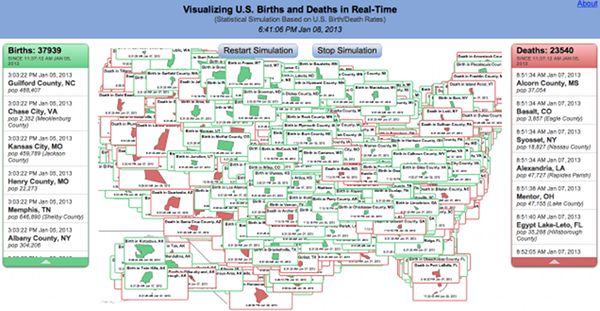 Assuming a Dunbar number of connections for each deceased person and for each pair of parents of each newborn, and no overlap between these networks, that’s at least 9.1 million people touched by grief or joy in half a week. That’s roughly 3% of the entire US population as at July 2012.

This is digital technology used to compelling storytelling effect.

It is evocative on a nationwide, macro scale.

And it is evocative at a local level.

Bowling Green, Kentucky is apparently in Warren County and has a population of 58,066. I wonder who the John or Jane Doe that gave this post its title might have been. How did they die? What proportion of this smallish community was touched by their death?

Bowling Green is one. But I have also “seen” deaths in Pleasantville, Ohio; Satsuma, Alabama; Defiance, Ohio (Ohio is obviously long on quirky place names); Cloverleaf, Texas; and my favourite Truth Or Consequences (I kid you not), New Mexico.